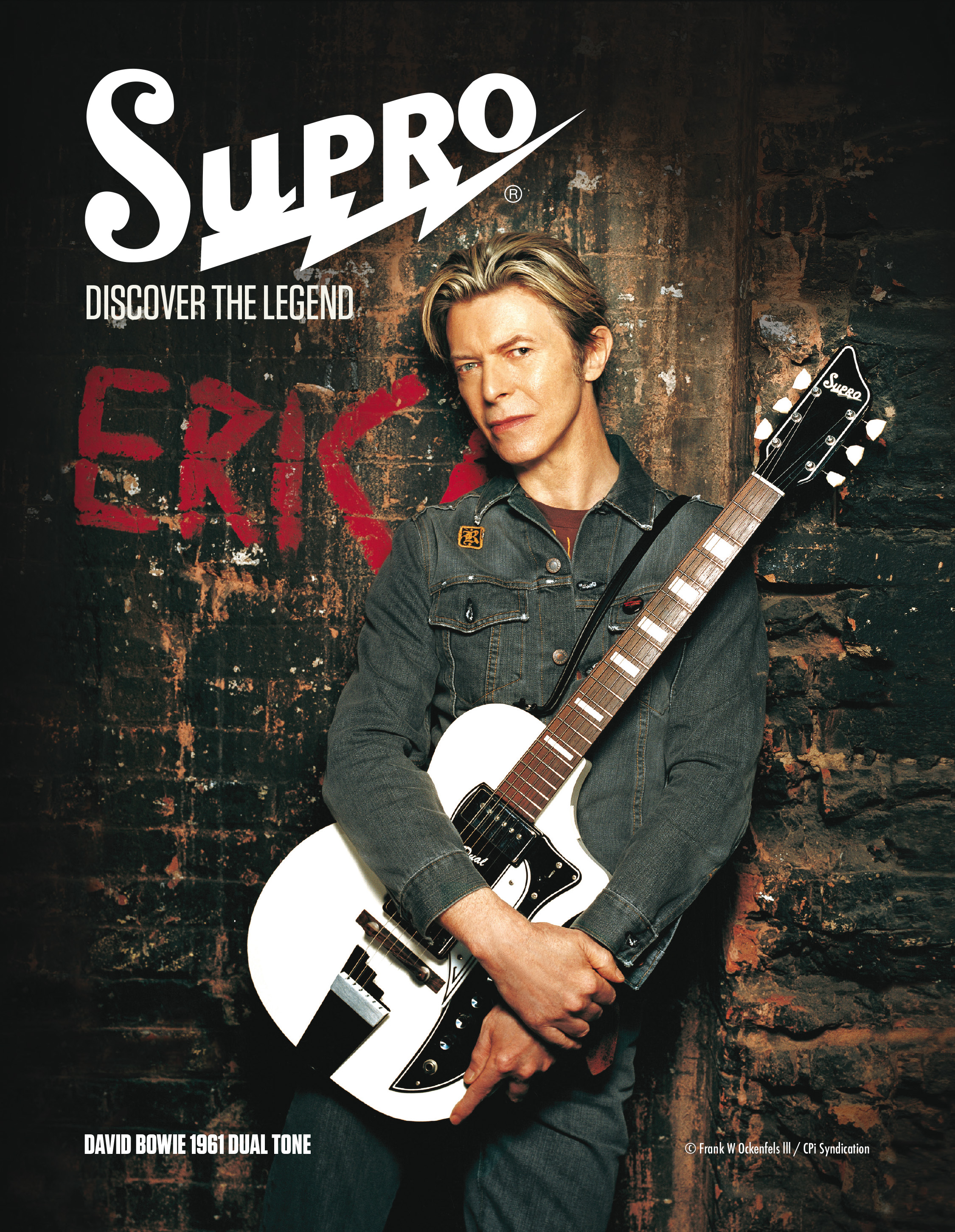 The story of the guitar is told by Richard Buskin in Sound on Sound Magazine’s October 2003 issue: “When Reality got underway, Bowie had only recently invested in several Supro guitars, one of them a hard-to-find white model similar to that played by Link Wray on ’Rumble’. He’d managed to pick this up on eBay (I kid you not) and had it revamped by Staten Island designer/ manufacturer/ restorer Flip Scipio. After Scipio went to work on it, Bowie ended up with a guitar that, according to Tony Visconti, ”was never meant to sound so good”, and he played this a lot during the Reality sessions, along with a Supro 12-string that had also been overhauled by Flip Scipio, and some harsh-sounding Supro valve amps.”

David Bowie’s love of the Dual Tone was strong, as evidenced by the guitar’s frequent appearance in promotional photos from his post-9/11 era in New York City. In fact, Bowie’s Dual Tone guitar features so prominently on the cover of the New Killer Star single (echoing the cover art for Link Wray’s iconic “Rumble”) that his own face isn’t shown at all.

The Dual Tone model first appeared in Supro catalogs in the early 1950s. The distinctive tone of the Supro Vistatone pickups has been a consistent highlight of this instrument throughout its evolution. The 1953 Supro catalog boasted: “We sincerely believe the pickup system to be the finest we have ever produced in over two decades of electronic development. Make an honest comparison with any instrument for tone, volume, and performance—you’ll be truly surprised.“ Over the subsequent five years after ’53, the neck was improved, headstock changed, body widened, pickup wiring changed, and contoured bevels added to the body. By 1958, the Dual Tone was totally dialed in, and became a bestseller for Supro.

In keeping with the spirit of innovation that evolved the 1953 Dual Tone into the 1961 model favored by David Bowie, the construction of the David Bowie 1961 Dual Tone guitar has been further developed with subtle tweaks and refinements to carry the torch into the present day—while retaining the vibe of the original instrument. This incarnation of the Dual Tone guitar features a 24 ¾” scale maple neck with a Pau Ferro fretboard and set-neck construction. The mahogany body has a tummy cut for increased playing comfort, as well as an ergonomic neck joint, allowing full access to the high frets. Hardware appointments include reverse stairstep tailpiece, tune-o-matic bridge, butterfly tulip tuning pegs and a matched set of vintage-correct Vistatone pickups, designed to replicate the genuine Supro sound that David Bowie loved. As a final touch, the David Bowie 1961 Dual Tone features a mirror-finish Bowie lightning bolt insignia on the face of the headstock.

The first batch of four hundred David Bowie 1961 Dual Tone guitars will ship following The NAMM Show at the end of January. Each instrument is numbered by hand and comes with a Supro deluxe gig bag and certificate of authenticity.